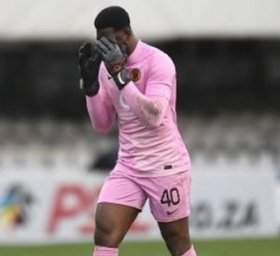 Kaizer Chiefs goalkeeper Daniel Akpeyi has reported for international duty in Morocco ahead of the Super Eagles upcoming World Cup qualifier against Liberia.
The Nigeria Football Federation confirmed on Monday evening that Akpeyi was the first invited player to arrive as he flew with the officials from Lagos.
The Super Eagles camp officially opened today with the officials and Akpeyi arriving Tangier at 1800 hours.
The team is expected to begin preparations for the meeting with the Lone Stars on Tuesday, November 8.
AC Omonia Nicosia glovesman Francis Uzoho has pulled out of the squad due to illness and as a result Akpeyi has climbed up the pecking order of goalkeepers, behind first choice goalie Maduka Okoye.
The former Warri Wolves star has not featured for the Super Eagles for close to two years, with his last appearance coming in a 4-2 road win over Lesotho in a 2021 Africa Cup of Nations qualifier.
This season, Akpeyi has recorded six appearances in the South African top-flight, keeping two clean sheets.
Ifeanyi Emmanuel
Copyright ANS