Subscribe
'It will be a tough game' - Rohr insists Super Eagles will not underrate underdogs Liberia
Published: November 12, 2021 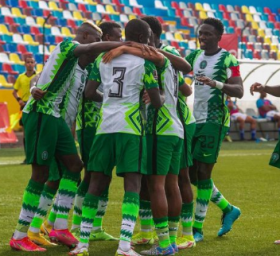 Nigeria are considered to be the favorites to top Group C of the 2022 World Cup qualifiers and they could seal qualification to the playoff round if they defeat Liberia on matchday five, provided that Cape Verde drop points against Central African Republic.
Apart from their FIFA ranking, Liberia are the underdogs heading into Saturday's fixture at Stade Ibn Batouta, Tangier having lost three of their four matches in the group.
Nigeria manager Gernot Rohr is taking nothing for granted, pointing out that the Lone Stars showed their qualities in the second half in the opening round of qualifiers.
The Super Eagles managed to see off Liberia thanks to a first half brace from Leicester City striker, Kelechi Iheanacho, assisted by Alex Iwobi.
In their last outing, Liberia were close to earning a share of the points against Cape Verde, only to concede in the very last minute of the contest.
Speaking at Thursday's pre-match press conference, Rohr said : "We respect a lot this team, we saw already in Lagos in the second half they made a good match, it was not easy to beat them.

"And in the last game against Cape Verde they deserved a draw so that's why we believe it will be a tough game for us. We are not underrating them".
Africa's most successful team at the World Cup in terms of points accumulated, Nigeria have qualified for six of the last seven tournaments, in 1994, 1998, 2002, 2010, 2014 and 2018.
Ifeanyi Emmanuel
Copyright ANS