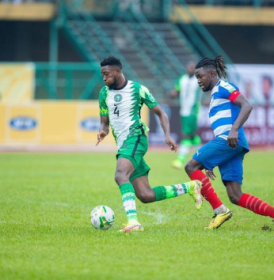 The Franco-German has made two changes to the side that defeated Central African Republic on matchday four, leaving out skipper Ahmed Musa and Brentford midfielder Frank Onyeka from the starting XI.

Rohr has chosen to set up his team in what looks to be a 3-5-2 formation, with Maduka Okoye retaining his place in goal.

In front of the Watford-bound goalkeeper is a backline consisting of Chidozie Awaziem, William Troost-Ekong and Leon Balogun.

Leicester City star Wilfred Ndidi starts in the center of midfield with Joe Aribo and Alex Iwobi completing the engine room, while Moses Simon and Jamilu Collins will operate as wing-backs.

Kelechi Iheanacho and Victor Osimhen, joint top scorers for the Super Eagles in the World Cup qualifiers, start in attack.