Subscribe
'We didn't want to make a mistake' - Rohr explains why he didn't use up all his substitutes vs Liberia
Published: November 15, 2021 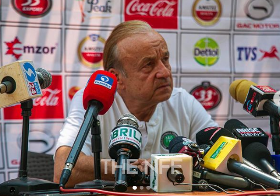 Gernot Rohr was criticized for his decision to bring in only two of his substitutes during Nigeria's 2-0 win over Liberia in  a 2022 World Cup qualifier two days ago.
Alex Iwobi left the pitch in the 62nd minute to be replaced by CSKA Moscow winger Chidera Ejuke and Kelechi Iheanacho made way for Ahmed Musa with three minutes left on the clock.
Rohr claims that he had to stick with the players that started for majority of the game because they gave a good account of themselves, coupled with the fact that the substitutes were left cold on the bench.
Speaking at the pre-match press conference ahead of tomorrow's game against Cape Verde, Rohr told reporters : "Why do you want to do substitutions if everybody is doing well. We did two substitutions, one was Iwobi who was replaced by Ejuke, bringing him like in Cameroon against Central African Republic.

"Musa came in and scored the second goal, it is not easy to score a penalty especially if you come in only a few minutes so I  was very happy about the two changes.

"Morocco it was cold, it was not easy for them to come in, we didn't want to make a mistake at 1-0 and to concede a goal.

"I think the substitutions is not a question of the number of people who are coming in but of the quality they can bring in."
Teams are permitted to name up to twelve substitutes on the bench for the 2022 World Cup qualifiers with five allowed to enter the pitch.
On matchday one vs Liberia, Rohr made all his allocated substitutes, used four the following matchday and three each in the double-header with Central African Republic last month.
Igho Kingsley