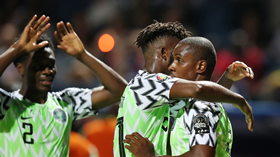 Manager Gernot Rohr has announced his starting lineup for the match all Nigerians have been waiting for, a 2022 World Cup qualifier against Cape Verde at the Teslim Balogun Stadium on Tuesday evening.
The Franco-German football manager has made just one change to the team that defeated Liberia 2-0 three days ago, bringing in former Manchester United striker Odion Ighalo, a decision that sees Kelechi Iheanacho drop to the bench.

Rohr confirmed at the pre-match press conference that Ighalo was to be included in the matchday 23 and he has gone a step further by naming the Al-Shabab star in his starting XI.

The last time Ighalo started a game for the national team was 853 days ago, in a third place playoff against Tunisia at the Africa Cup of Nations on July 17, 2019,  before calling time on his international career.

Watford-bound goalkeeper Maduka Okoye starts in goal while Chidozie Awaziem has kept his place among the central defenders alongside William Troost-Ekong and Leon Balogun.

In midfield, Wilfred Ndidi lines up alongside Joe Aribo and Alex Iwobi, with Moses Simon and Jamilu Collins operating as wing-backs.