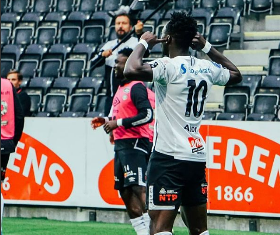 Through their official website, European champions Chelsea have confirmed that their legendary striker Tore Andre Flo will be leaving his position as a loan player technical coach at the end of 2021 to take a coaching role in his homeland of Norway.
The Norway icon has agreed a three-year deal with Sogndal Fotball, with effect from January 1, 2022.
Two Nigerian center forwards Akor Adams and Peter Godly Michael, who are contracted to Sogndal Fotball beyond 2021, will have the honour of being tutored by one of the best Scandinavian strikers to grace the English Premier League, provided that they don't move on to pastures new.
A member of the Flying Eagles squad to the 2019 FIFA U20 World Cup in Poland, Akor is Sogndal's top scorer in the Norwegian second-tier this term with 10 goals in 24 appearances - of which 20 were starts.
A product of Jamba Football Academy in his homeland, Akor initially joined Sogndal Fotball on loan in August 2018 before the deal was made permanent the following year.
The 23-year-old Michael has not played much this season but has delivered when called upon, netting two goals in four matches.
Tore Andre Flo had two different spells at Sogndal as a player, from 1993-1994 before returning for a last dance in 2011.
Ifeanyi Emmanuel
Copyright ANS