Subscribe
'I can see his hunger' - Ighalo predicts Osimhen will move to Premier League in 2-3 years' time
Published: November 19, 2021 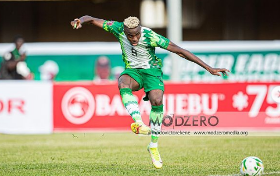 Former Manchester United star Odion Ighalo has predicted that Victor Osimhen will be playing in the English Premier League within three years.
The 2015 U17 World Cup Golden Boot winner was linked with possible moves to the likes of Tottenham Hotspur, Manchester United, Arsenal, Chelsea and Liverpool in 2020 but Napoli pulled off a transfer coup by signing him for a club-record fee in the region of 70 million euros.
Ighalo admitted that Osimhen was frustrated at his lack of game-time during the 2019 Africa Cup of Nations but he advised the former Wolfsburg starlet to be patient and that he would get his chance in the coming months.
Osimhen has a mentor-mentee relationship with Ighalo and traveled to Belgium to watch the then Manchester United striker make his European debut against Club Brugge in February 2020.
Ighalo is delighted that his understudy has come of age just as he predicted, with a total of 47 goals for club and country over the last two years.
Speaking to King Ekong's YouTube channel, Ighalo said : "I'm very happy and I'm proud of Victor, I do communicate with him every time, I keep encouraging him that he's doing so well, he should keep being humble, keep working harder.

"He has not achieved anything yet because I know in two to three years' time this guy will be playing in the Premier League and going to be the best scorer because I can see his hunger.

"Even when we were in the Cup (AFCON) he was bit frustrated he was not playing, he's not happy.

"I told him Victor your time will come, I told him I'm leaving you are the one that is going to take over this number 9 shirt if you believe in yourself and you work hard, I can see your potential and I'm so happy and glad that he's doing that. "
For the first time in his career, Ighalo played alongside Osimhen in the most recent 2022 World Cup qualifying match between Nigeria and Cape Verde at the Teslim Balogun Stadium.
Ifeanyi Emmanuel
Copyright ANS