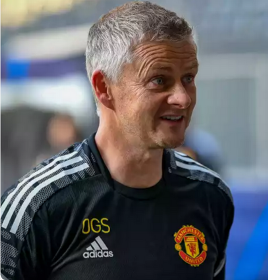 Through their official website, Manchester United confirmed on Sunday morning that Ole Gunnar Solskjaer has left his role as manager.
Saturday's humiliating 4-1 loss to Emmanuel Dennis' Watford proved the last time the Norwegian was in the dugout as Manchester United coach, their fourth loss in five Premier League games.
Solskjaer took over the reins in December 2018, initially as a caretaker coach, before he was appointed on a permanent basis, and won 92 of the 168 games he was in charge while drawing 35 and losing 41.
The retired Norway international did not win any trophy during his time at United but helped the club qualify for the final of the 2020-2021 Europa League.
The 48-year-old, who is close pals with Odion Ighalo's agent, gave his blessing to the signing of the Super Eagles striker on a loan deal from Shanghai Shenhua in January 2020.
The dismissal of Solskjaer was met with mixed reactions from Manchester United fans based in Nigeria.
Allnigeriasoccer.com takes a look at what the fans said on Facebook following the announcement :
Demola Adeshina : "Congratulationsto all of us.Please get the recruitment of a new coach better".

Azeez Jamiu Oluwaseun : "That's how you guys celebrated when Jose was sacked nothing change since then".

Aniyikaye Samuel Oluwatosin : "Demola Adesina I guess if he was your father or brother you won’t be happy seeing this, clueless fan".

Wisdom Sunday : "So sad. He deserved more time. We will regret our action later".

Sunday Okunola Ajegunma : "Sad! I feel for him leaving this way.Good luck in your future endeavours, OGS."

Walter Chibuzo : "I wanted you to succeed as United boss. I supported you from the very first day you arrived here as the gaffer. But things have become worse than we can manage. It's time to say good bye. But I must thank you for assembling such array of talents at United now. I personally wish you the best in your future endeavors."

Abraham Numolayefa Osaisai : "All He needed is just a little time to turn thing around, Ole is a legend and He deserves some respect, we will regret our action sooner or later".

Austine Chelsy Ikpehai : "Too bad that they could not wait after Chelsea's game before sacking him, I am particularly pained with this early sack".

Oginni Bolaji Olusegun : "What a great coach... He would have waited for Arsenal to play him first..."

Igwe Johnson Chibuzor : "Why now the best coach has gone man u will regret it this man is building a strong team".