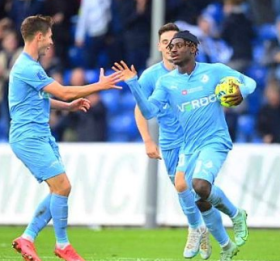 Through a press release published on their official website, Danish Superliga side Randers have announced the permanent acquisition of Super Eagles striker Stephen Odey.
The former Mountain of Fire sensation joined Randers on a season-long loan in August and the deal came with an option to buy him from Racing Genk.
Given how successful the loan spell has been, Randers have activated the purchase option for Odey, who is now contracted to the club until June 30, 2024 after signing for two years and seven months.
Although Randers have not disclosed the transfer fee, allnigeriasoccer.com can report with certainty that Odey has joined the Horses in exchange for one million euros (approximately N467 million in Nigerian currency), making him the most expensive player in the history of the club.
It is confirmed that Racing Genk have not included a sell-on clause into the deal taking Odey to Randers.
Commenting on his permanent transfer to Randers, Odey told Randers' official website : "I'm really happy. Because now I do not have to answer journalists who ask if I stay or leave. Now everyone can see that I am a Randers FC player".
Odey has scored 10 goals in fifteen appearances across all competitions since joining Randers.
Ifeanyi Emmanuel
Copyright ANS