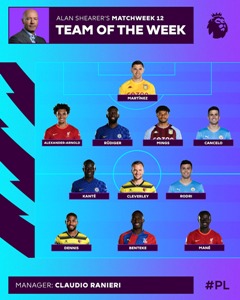 Newcastle United and England legend Alan Shearer has named Nigeria international Emmanuel Dennis in his English Premier League Team of the Week for matchday 12.
Dennis directly participated in three goals as Watford, against all the odds, thrashed Manchester United 4-1 at Vicarage Road on Saturday evening.
Joshua King broke the deadlock just before the half-hour mark after he was set up by Emmanuel Dennis and Ismaila Sarr put his penalty disappointment behind him when he lashed home from inside the box to give the Hornets a 2-0 lead at the interval.
After assisting Joao Pedro score Watford's third goal, Dennis made it 4-1 with a brilliant accurate strike into the bottom corner in stoppage time.
In a 4-3-3 formation, the Super Eagles star has been deployed as a right-sided winger, with Christian Benteke (Crystal Palace) and Sadio Mane (Liverpool) completing the front three.
Shearer, the Premier League's all-time record goalscorer, praised Dennis for his impact in the final third.
"Set up Joshua King for Watford's opener and chipped in with another assist for Joao Pedro before netting himself. A top performance in the Hornets' best win of the season," Shearer said.
Shearer's Premier League Team of the Week is managed by Watford boss Claudio Ranieri, whose game plan against Manchester United was executed to perfection by his players.
Igho Kingsley
Photo Credit : watfordfc.com
Copyright ANS