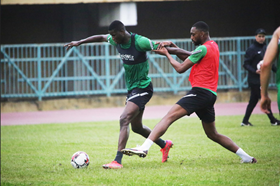 Former Racing Genk coach John van den Brom says he is surprised that no club took the chance to sign Paul Onuachu in the summer transfer window.
Almost everyone expected Onuachu to seal a move to a club in the top five European Leagues in the summer after a banner 2020-2021 campaign that saw him win the Golden Boot award in Belgium with 33 goals but a transfer did not happen.
In his native Nigeria, the FC Ebedei product was recognized for his outstanding displays, winning the Nigeria Football Federation's Best Performer of the Year in September 2021.
John van den Brom is pleased with the manner Onuachu conducted himself despite the failed transfer.
"Paul hoped for a transfer, but in the end no one came," he told Het Laatste Nieuws via voetbalkrant.
"The last days before the closing of the transfer window he realized that he would have to stay. Was he disappointed? Let's say he's a boy who's too sweet".
John va den Brom added : "Dimitri De Condé then very cleverly extended Onuachu 's contract . But I still don't understand that no club was concrete for him.
"Put Paul in a top league, surround him with even better players and he will score his goals there too. I really like him very much."
Onuachu has already reached double figures for goals four months into the 2021-2022 season, getting his name on the scoresheet twelve times in 21 matches across all competitions.
Ifeanyi Emmanuel
Copyright ANS