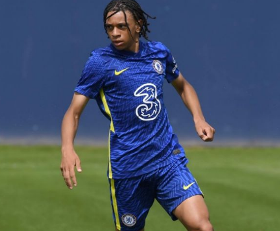 Chelsea suffered a 3-1 defeat at the hands of Juventus in a UEFA Youth League clash staged at Cobham Training Center on Tuesday afternoon.
Richard Olise, the younger brother of 2021 Super Eagles invitee Michael Olise, made his debut in the competition, and was joined in the starting lineup by Bryan Fiabema, while former Golden Eaglets invitee Prince Adegoke was a non-playing substitute.
Malvano gave Juventus a dream start when he fired past goalkeeper Bergstrom to open the scoring in the second minute.
And things got from bad to worse for the hosts when Miretti doubled the advantage from the spot just past the half-hour mark before Turco put the game to bed with Juventus' third goal in the 44th minute.
One of the two changes made by Chelsea U19 boss Andrew Myers at halftime saw Jude Soonsup-Bell replace Bryan Fiabema, who struggled a bit in the first half.
Joe Haigh was in the right place at the right time to poke home in the 90th minute and reduced the deficit with Olise involved in the build-up to the consolation goal.
Two-time champions Chelsea will travel to St. Petersburg in the final round of matches in Group H and must avoid defeat against Zenit to progress to the knockout rounds of the UEFA Youth League.
Ifeanyi Emmanuel
Photo Credit : chelseafc.com
Copyright ANS