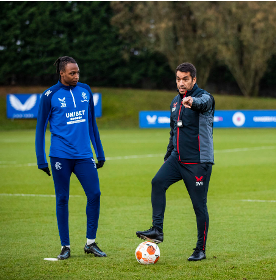 On Tuesday, new Glasgow Rangers boss Giovanni van Bronckhorst took his first training session since his appointment as coach of the Scottish Premiership champions.
The Dutchman has been granted a work permit, paving the way for him to officially start work at the Light Blues.
Training images published by the official website of Rangers confirm that Giovanni van Bronckhorst monitored at close quarters Joe Aribo and a second Nigerian player in Calvin Bassey also participated in the session.
A short clip uploaded on Rangers YouTube page (0.30) showed Bassey arriving the Training Ground.
Leon Balogun was not spotted in the training images and trailer but this does not necessarily mean that he was absent from training.
The Super Eagles defender had a stinker of a game as Rangers crashed out of the Premier Sports Cup on Sunday following a 3-1 loss to Hibernian.
Van Bronckhorst will take his seat in the home dugout for the first time when Rangers battle Sparta Prague in the Europa League on Thursday night.
Ifeanyi Emmanuel
Photo Credit : Rangers
Copyright ANS