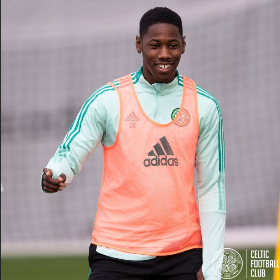 Glasgow Celtic defender Osaze Urhoghide has sensationally revealed that he arrived injured at a Nigeria U23 training camp back in 2019.
Born in the Netherlands, Urhoghide also qualifies to represent England where he has lived since the age of five and the Super Eagles through his Nigerian parents.

The Nigeria Football Federation handed a maiden call-up to the center back to join a training camp before a 2019 U23 Africa Cup of Nations qualifying match against Libya.

Urhoghide knew full well that his body wasn't right but couldn't turn down the opportunity to show off to the Nigeria U23 coaching staff led by Imama Amapakabo.

The Anglo-Dutch-Nigerian starlet made a big leap in his career when he joined Scottish giants Celtic in July 2021, approximately three years after signing his first professional career at AFC Wimbledon.

"It was just an injury-plagued season to be honest. I actually went to an international, like a camp for Nigeria U23s as well, I was training, training," Urhoghide said in an intervew with RicFit.

"To be honest when I got there I was actually injured because the game before I injured my ankle but I knew this opportunity is so big I have to go.

"I went there, at first it was fine, but then later on there was one session I couldn't even run because first of all both my hamstrings were finished, my ankle was finished then plus that I got ill in Nigeria.

"I've never got ill like that before so then I had to come back early".


Urhoghide faced current Premier League clubs Leeds United, Brentford, Norwich City, Watford, Brighton & Hove and Everton during his time with Sheffield Wednesday.
Ifeanyi Emmanuel
Photo Credit : celticfc.com
Copyright ANS
All rights reserved. This material, and other digital content on this website, may not be reproduced, published, rewritten or redistributed in whole or in part without prior express written permission from allnigeriasoccer.com