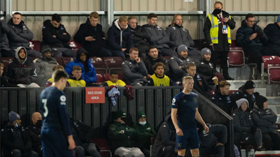 New Aston Villa boss Steven Gerrard monitored at close quarters three players of Nigerian descent during Aston Villa's 4-1 rout of Burnley in a Premier League 2 Division Two clash on Monday, November 22.
According to Aston Villa's official website, Gerrard and his backroom staff were present at Bodymoor Heath Training Ground in Warwickshire.
Caleb and Carney Chukwuemeka, and Tim Iroegbunam were selected in the starting lineup of the Young Lions and only Caleb did not put in a full shift after he was substituted in the 82nd minute.
Carney Chukwuemeka was a reserve option for Aston Villa in Gerrard's first game in charge last weekend, a 2-0 win over Brighton & Hove.
The England U19 skipper made five first team appearances under former Aston Villa manager Dean Smith, while his sibling Caleb made his first team debut against Barrow in the Carabao Cup exactly three months ago, after joining from Northampton Town.
Against the Clarets, Caleb Chukwuemeka enhanced his growing reputation when he tapped the ball into the net to double Aston Villa's advantage in the 24th minute, taking his tally in the division to seven goals.
Aston Villa have started preparations for their next Premier League game against Michael Olise's Crystal Palace at Selhurst Park Stadium.
Ifeanyi Emmanuel
Photo Credit : Aston Villa
Copyright ANS