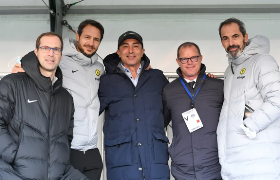 Three Chelsea legends were in attendance at Cobham Training Center on Tuesday afternoon as Chelsea were beaten 3-1 by Juventus U19s in the UEFA Youth League.
According to Chelsea's official website, Petr Cech, Carlo Cudicini and Roberto Di Matteo watched the UEFA Youth League match between Chelsea and Juventus.
Norway youth international of Nigerian striker Bryan Fiabema started for the Blues alongside fullback Richard Olise, the younger brother of Crystal Palace winger Michael Olise, and a third player of Nigerian descent in 2019 Golden Eaglets invitee Prince Adegoke was a reserve option.
Cech, Cudicini and Roberto Di Matteo feasted their eyes on Olise for ninety minutes while Fiabema was on parade for the whole of the first half.
Fiabema, who has largely impressed this season, struggled to get into the game before he was hooked off.
Di Matteo was in the Chelsea dugout when they won the UEFA Champions League in 2012 and the squad contained former Super Eagles captain John Obi Mikel and Cech.
The aforementioned teenagers of Nigerian descent have signed professional contracts at Chelsea.
Ifeanyi Emmanuel
Photo Credit : chelseafc.com
Copyright ANS