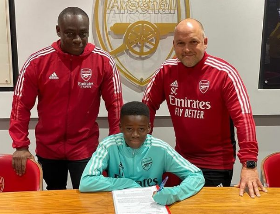 Arsenal have bolstered their academy ranks with the signing of Nigeria-eligible defender Tomiwa Akinyimika.
Akinyimika has joined the Gunners youth team from Newham-based Levels FC, a Sunday League Football Club competing in the Echo Junior Football League.
The Anglo-Nigerian will initially play for Arsenal's U13 team and will be aiming to sign scholarship forms with the north London club in the coming years.
A left-back by trade, he has been working hard over the past two years before he was poached by Arsenal.
As many as eleven players eligible to represent the Nigerian national teams were classed as scholars on Arsenal's Premier League roster.
They are Ryan Alebiosu, Tim Akinola, Zachariah Awe, Folarin Balogun, Nathan Butler-Oyedeji, Henry Timi Davies, Ovie Ejeheri, Joel Ideho, Mazeed Ogungbo, Arthur Okonkwo and James Olayinka.
A 12th player in midfielder Miguel Azeez is not eligible to represent the Gunners in the top-flight following his season-long loan move to League One outfit Portsmouth.
Nigeria international Alex Iwobi and Super Eagles hopeful Chuba Akpom rose through the academy ranks before making their first team debuts for Arsenal.
Ifeanyi Emmanuel
Photo Credit : Team Nigeria UK
Copyright ANS