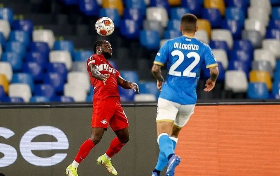 Spartak Moscow have moved from bottom to top of the Europa League Group C standings after a 2-1 win over Napoli at the Stadion Spartak - Moscow on Wednesday evening.
Former Chelsea star Victor Moses started for the Muscovites while Victor Osimhen was left behind in Naples after undergoing surgery that would reportedly keep him out of action for three months.
Two goals in the opening twenty eight minutes from Aleksandr Sobolev were enough for the Russian Premier League side to secure three points.
Sobolev sent Napoli goalkeeper Alex Meret the wrong way to open the scoring in the third minute after Lobotka conceded a penalty for tripping Promes on the edge of the box.
Moses had an effort on goal in the eleventh minute but the shot which lacked power was dealt with by the Napoli goalkeeper.
Sobolev guided the ball inside the far post to double the advantage after he was teed up by the former Chelsea man.
Eljif Elmas' 64th minute strike brought Napoli back into the game but the Spartak goalkeeper didn't have much to do after the goal.
Moses was replaced with seven minutes remaining and the wing-back opted to watch the rest of the game from the changing room.
Napoli haven't managed a win in three games, the longest they have gone without a win in the 2021-2022 campaign.
Igho Kingsley
Copyright ANS