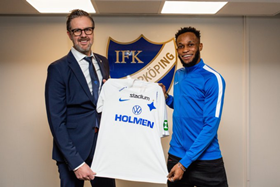 Rikard Norling, coach of IFK Norrköping, is hoping Samuel Adegbenro remains at the Swedish Allsvenskan club next season.
The Nigerian striker has already put himself in the shop window ahead of the reopening of the transfer window in Europe, mustering 19 goals from 35 appearances in all competitions, including seventeen in the league.
Adegbenro arrived at IFK Norrköping for a fee of ten thousand euros but his former club Rosenborg stand to profit from his future sale having inserted a sell-on clause into the deal bringing him to Sweden.
"Right now he is incredibly good, but it costs money too. It is an enormous force that goes through the body.
"He is right on the border, " says IFK coach Rikard Norling to NT-sporten via Fotbolltransfers.com.
Norling has a tough task in his attempt to convince Adegbenro to remain at the club for at least one more season.
"Yes, I'll do it. If nothing else, I hope he stays. It will increase our chances of being as good as possible," he concluded.
Adegbenro turned out for Prime and Kwara United in his native Nigeria before moving to Scandinavia in February 2015.
Ifeanyi Emmanuel
Copyright ANS