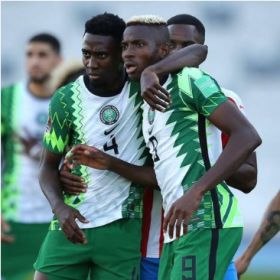 According to reports in the Italian media, the Nigeria Football Federation are not resigned to not having Victor Osimhen represent the Super Eagles at the 2021 Africa Cup of Nations.
Osimhen underwent surgery on Tuesday and the medical bulletin issued by the Serie A club suggests that he will not return to the pitch until February 21, fifteen days after the conclusion of the tournament in Cameroon.
At first, it was widely reported that Osimhen would be out of action until mid-December but Napoli have insisted that he has to miss the Africa Cup of Nations.
Italian daily newspaper La Repubblica (via Casa Napoli) wrote on its print edition on Wednesday that 'It will take an international medical consultation to convince Nigeria of the fact that Osimhen cannot leave with the national team".
A club versus country row is now brewing between Napoli and Nigeria over the availability of the Super Eagles number nine for the AFCON .
The report added that Napoli chief De Laurentiis is ready to protect himself with the legal aid of the lawyer Enrico Lubrano, who will have to provide evidence that Osimhen is unable to play during the AFCON and shortening the time would be a risk to the attacker's health.
Ifeanyi Emmanuel
Copyright ANS