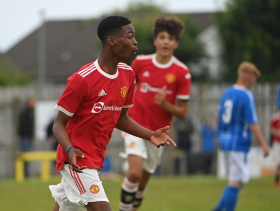 Manchester United striker of Nigerian descent Victor Musa Aigbomian made his debut for Spain's U16 national team, La Rojita on Wednesday, November 24, allnigeriasoccer.com reports.
The St Bede's and St Joseph's Catholic College product started for Spain as they registered a convincing 3-0 win over Republic of Ireland in their opening match of the Alfaz de Pí International Tournament.
Musa was in action for forty minutes before making way for FC Barcelona center forward Hugo Alba.
Following a goalless first half, Spain were ruthless in the second half, scoring three goals without reply.
Mohamed Dahmouni turned the ball home to open the scoring in the 61st minute, Alba who replaced Musa finished from close range to double the advantage at minute 76 and Jorge Castillo found the bottom corner to make it 3-0 two minutes later.
Bohemians winger of Nigerian descent, Nickson Okosun played the final thirty minutes for the Republic of Ireland.
Up next for Musa and his Spanish teammates, they face Norway on November 26, starting from 1100 hours.
Ifeanyi Emmanuel
Photo Credit : supercupni.com
Copyright ANS