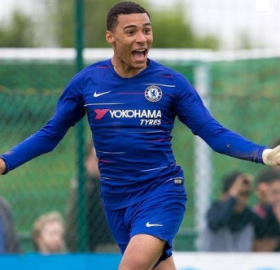 Southampton came out on top in a nine-goal thriller against Chelsea in an U17 Premier League Cup clash at Cobham Training Center on Wednesday.
The Saints team were more experienced than their Chelsea counterparts, according to Chelsea youth team insider Chelsea Youth.
Anglo-Nigerian center forward Louis Flower was on target for the Young Blues and he was joined on the scoresheet by Tyrique George and Zain Silcott-Duberry, who bagged a brace.
Chelsea exit the competition without winning a single game, losing to Brighton & Hove and Southampton and playing out a 3-3 draw with Reading.
Southampton advance to the knockout rounds with a one hundred percent record and were ruthless in attack, with seventeen goals scored.
Flower was on scholarship terms at Chelsea at the start of the season before signing his first professional contract last month , after turning seventeen.
The versatile striker has been on the books of Chelsea since U13 level following his move from Cambridge United.
Igho Kingsley
Copyright ANS