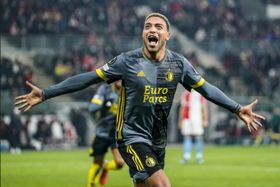 The points were divided equally between Slavia Prague and Feyenoord Rotterdam in Group E of the Europa Conference League with both teams playing out a 2-2 draw at the Sinobo Stadium on Thursday.
Slavia Prague led by one goal until the third minute of stoppage time when Super Eagles striker Cyriel Dessers grabbed the equaliser.

Peter Olayinka slotted home to open the scoring in the eleventh minute after Alexander Bah intercepted a pass and found the Nigeria international.
Dessers smashed the ball past goalkeeper Mandous to make it 1-1 after a pass from Toornstra on the right wing.
After Jan Kuchta restored Slavia's lead in the 66th minute, the Czech side thought they had secured all three points but Dessers had the final say as he brought the game back to parity with a header in injury time.
The Racing Genk loanee, who came off the bench in the 19th minute, was delighted to get on the scoresheet and revealed which of his two goals vs Slavia Prague was his favourite.
In quotes relayed by UEFA's official website, Dessers said : "It is my job as striker to score of course but if you score two goals against such a strong team in an important match it is fantastic!
"Which one did I like more? I don't score a lot of headers so I liked the second one more; the first was a nice turn and good finish with my left foot but the second one was very, very nice.
"If you see the ball going into the net like that, it is superb feeling".
Despite not being a guaranteed starter, Dessers has netted an impressive seven goals in thirteen appearances for Feyenoord since his loan move in August.
Ifeanyi Emmanuel
Photo Credit : uefa.com
Copyright ANS