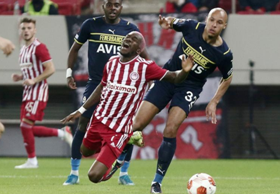 Greek club Olympiakos are through to the knockout phase of the UEFA Europa League after a 1-0 win over Fenerbahce on Thursday.

Manager of Olympiakos, Pedro Martins handed Henry Onyekuru his second consecutive start in the competition and he wasn't the only Nigerian-born winger who started from the off as Bright Osayi-Samuel made Fenerbahce's starting XI.

According to Sport Time via The Sun, Premier League giants Liverpool and Serie A powerhouse Juventus had their representatives at the stadium and it has been suggested that they were checking out Olympiakos attacking midfielder Aguibou Camara.

Onyekuru thought he had won a penalty in the beginning of the match after he was allegedly fouled by Tisserand but the Spanish referee Antonio Mateu continued the game and even after the incident was checked by VAR the initial decision stood.

As it seemed both teams would settle for a point, Tiquinho Soares netted the game-winning goal right at the death to secure three points for the Greek Super League side.

Onyekuru, who was replaced at halftime, has scored just once in fifteen matches since switching from Monaco on a permanent deal in August.

Former Queens Park Rangers dazzler Osayi-Samuel has one goal from seventeen matches for Fenerbahce so far this season.