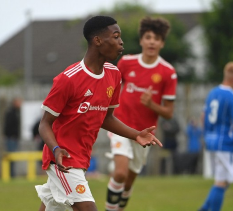 Allnigeriasoccer.com can exclusively report that talented Nigeria-eligible striker Victor Musa Aigbomian cut his footballing teeth at Club Deportivo Lourdes before his move to Manchester United.
Club Deportivo Lourdes is a club based in Tudela, in the autonomous community of Navarra, and their first team compete in the Primera Autonómica de Navarra - equivalent of sixth-tier of Spanish football.
The 2006-born Spanish-Nigerian starlet was registered as a player of Club Deportivo Lourdes for three seasons, 2014-2015, 2015-2016 and 2016-2017 before he relocated to the United Kingdom. 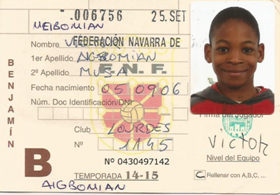 Musa was categorized as a Benjamin when he initially joined Club Deportivo Lourdes for the 2014-2015 season.
Upon his arrival in England, the highly-rated teenager attended St Bede's and St Joseph's Catholic College, from where he joined Manchester United as a schoolboy in the summer of 2021.
Should he remain at Manchester United and impress the coaching staff, he is expected to be offered scholarship terms by the Premier League giants for the 2023-2024 season.
Musa made his international debut for Spain U16s in a 3-0 win over Republic of Ireland on Wednesday, November 24.
Ifeanyi Emmanuel
Copyright ANS