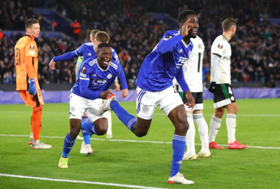 Wilfred Ndidi is anticipating a tough match when Leicester City take on Watford in a Premier League encounter at King Power Stadium on Sunday afternoon.
Although Watford are sixteenth in the table, the Nigeria international has underlined that the opponents should not be underestimated.
Under a new coach in Claudio Ranieri, the Hornets shocked a Manchester United side containing Cristiano Ronaldo, Jadon Sancho, Marcus Rashford and Bruno Fernandes in their last game.
"We’re expecting a tough game, but one which provides a great opportunity to build confidence and pick up points," Ndidi said to City Matchday Programme.

"They had a great result against Manchester United in their last game so we know they will be feeling good, but we’re playing at home, in front of our fans, and we believe we can get the win."
Ndidi has thanked former Leicester City boss Ranieri for giving him the opportunity to play in the Premier League.
Signed from Racing Genk in January 2017, the defensive midfielder played eight games with Ranieri in the dugout before the Italian was relieved of his duties.
"I’m very grateful to him because he gave me the opportunity to come to Leicester and play in the Premier League for the first time.
"That was a really important move in my career, so I’ll always remember it. Joining Leicester City has been fantastic for me. It’s a great club," Ndidi added.
Leicester City are thirteenth in the standings and are winless in their last three Premier League games before the visit of Watford.
Ifeanyi Emmanuel