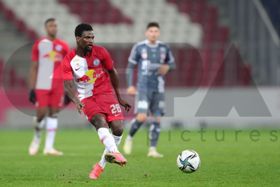 Former Golden Eaglets skipper Samson Tijani has spoken about his relationship with Red Bull Salzburg starlets of Nigerian descent Noah Okafor, Bryan Okoh, Chukwubuike Adamu, Karim Adeyemi and Justin Omoregie.
Okafor, Adamu and Adeyemi are cap-tied to the senior national teams of Switzerland, Austria and Germany respectively, while Okoh was in line to play a cap-tying game for Switzerland this month but suffered a cruciate ligament rupture in his right knee in the final training session before the meeting with Italy.
Center back Omoregie is provisionally cap-tied to Austria and is a current U19 international for the European nation.
Signed after starring for the Golden Eaglets at the 2019 FIFA U17 World Cup, Tijani had to learn about the Austrian culture and the football requirements in a top club and it wasn't easy at first but he is now fully adapted thanks to the Red Bull Salzburg players of Nigerian descent.
The defensive midfielder has made a positive impact for Salzburg's reserve team, FC Liefering in the Austrian second-tier this season, helping them register six wins and two draws in the eight matches he has featured.
A first team debut for Red Bull Salzburg could be in the offing if Tijani continues to catch the eye at Liefering.
Speaking to allnigeriasoccer.com on Sunday, Tijani said : "When the season started I was not really fit that's why I missed about eight games. I can't really say when I will make my first team debut for Salzburg, God knows that .

"They really helped me a lot to adapt to the club, I talk to them but not every time of course.

"Me and Bryan we are really, really close because he is in FC Liefering also. He is sitting beside me now so we are really close, and Justin also. They really helped me a lot."
Tijani has not played for the Super Eagles since making his senior debut in a friendly against Tunisia in October 2020.
Ifeanyi Emmanuel
Copyright ANS