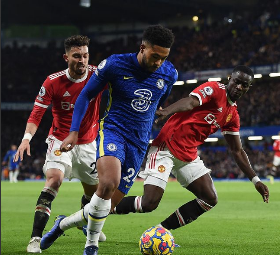 Premier League leaders Chelsea played out a 1-1 draw with Manchester United at Stamford Bridge on Sunday evening.
No player of Nigerian descent was involved in the fixture; Shola Shoretire wasn't picked by the Red Devils while Tariq Uwakwe has not been registered by the Blues for the Premier League as he was born before January 2000.
In what was Manchester United's first Premier League game since the dismissal of Ole Gunnar Solskjaer, Jadon Sancho gave the visitors the lead against the run of play when he capitalized on a howler by Jorginho four minutes after the restart.
Chelsea went for an equaliser and got it with twenty minutes remaining as Jorginho atoned for his mistake by converting a penalty awarded after Aaron Wan-Bissaka caught Thiago Silva in the area.
Many Chelsea fans here in Nigeria were disappointed with the draw, with some rueing the absence of Ben Chilwell as a contributing factor to why they dropped points, others questioned manager Thomas Tuchel's team selection.
Nigerian fans commented on a post from Chelsea's official Facebook page shortly after the game, and here's what they said below :
Nwosu Nkemakolam Bright : "Loftus cheek, Alonso and jorgiho weren't in the game.all the Same draw is better than losing to Man U in our home".

Aniete Ekong : "We have to do something about being clearly the favourites, being so dominant and having so many chances but unable to convert. Manchester United should have been buried in the first half if we had taken the chances and be more clinical."

Chukwuebuka Bugatti Nweze : "We deserved more than 3points in this game."

Osita Austine : "I saw this coming, the hype is too much.Ben chilwell's absence is highly missed."

Michael Henry : "We really deserve the win. So much chances wasted".

Kvg Davickberry Ayo : "It’s so painful we draw the game ..wish Ben chilwel was fit ..those chances would have useful..Alonso is old and he can handle pressure on the pitch ..luckily we draw ..still in ,still topping ,..the Best is yet to come"

Ifijeh Efe : "Werner was so bad. Although we didn’t give it our best shot. We really tired. Tuchel should’ve made changes earlier than he did".

Yinka Adeosun : "Tuchel left it too late to make obviously necessary changes. Alonso and Werner weren't substituted at the nick of time.What a painful draw".

Dadas Ola : "Wake me up when we are ready to win the league."

Opadeyi Oluseyi : "Very dissapointing display.You don't win the EPL this way. We just lack that cutting edge until they scored. Leaving Jorginho behind to track defensively is a joke. You have James who has more pace on the pitch.
No disrespect to Man utd, we need to be winning this kind of game if we truly intend to win the EPL.You can't be giving Lukaku and Pulisic 10-15mins of play when Ziyech and Odoi were acting confused for 75mins.
NB : Mendy trying to play from the back at times can besloppy, he almost turned 1point to 0 point."

Loretta Ibanga : "We should be winning not drawing".

Solomon Othuke Osumoro : "Returning of Werner and lukaku is a big problem for the team, i wish you guys should go back on injury cos both of you guys are poor today. ....up Chelsea".

Oluwakayode Odugbemi : "Another day at the office. We go again against Watford on Wednesday. English Premier League is tougher than you think!"