...the complete Nigerian football portal
Subscribe
'Defender should deal with it' - Leicester boss has his say on Troost-Ekong's howler
Published: November 29, 2021 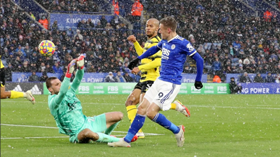 Leicester City manager Brendan Rodgers was on media duties shortly after his team defeated Watford 4-2 on matchday thirteen in the Premier League on Sunday and one of the topics he touched on was James Maddison's opening goal in the sixteenth minute.

The Foxes attacking midfielder looked pretty surprised that a long ball from Jonny Evans was served to him on a plate.

Watford center back William Troost-Ekong didn't challenge for the ball, allowing Maddison to steal in and score.

Rodgers pointed out that an individual error by the Nigeria international cost Watford as he should have dealt with the ball but was delighted that Maddison's gamble paid off.

Speaking to reporters at the post-match press conference, Rodgers explained : "I think obviously from Watford's perspective they look at that and think that the defender got to deal with it.

"From our perspective it was really good, we talked about doing more of that, getting back to that penetration and running without the ball, and for him if you see the movement one midfield player come short.

"He's the highest midfield player making the run in behind and that's what can happen. The defender should deal with it but he's gambled, he had a real positive mindset in getting there and obviously from that he's had the touch.

"It was a wonderful finish, just behind him a fraction but he's got his reward for making that run."

Having conceded 24 goals in thirteen matches, Watford have the third-worst defensive record in the Premier League so far.