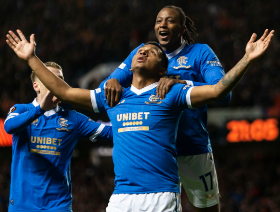 Joe Aribo has bee named in Whoscored.com's Scottish Premiership Team of the Week following his fantastic performance for Rangers in their 3-1 road win over Livingston on Sunday in what was Giovanni van Bronckhorst's first league game in charge of the Light Blues.
Sixteen minutes into the first half, the Super Eagles star scored his first goal under new coach van Bronckhorst when he slotted the ball in off the underside of the bar, right in the corner, to double the advantage.
The Scottish Premiership Team of the Week is dominated by Hearts who have contributed four players, followed by Rangers with three, the others being fullbacks Borna Barisic and James Tavernier.
In a 4-4-2 formation, Aribo was deployed as a central midfielder in the Premiership Team of the Week.
The Nigeria international earned a rating of 8.3, which was only bettered by two other Premiership players this past weekend; Rangers right-back Tavernier (8.7) and Hearts center back Stephen Kingsley (9.2) .
Against Livingston, Aribo won four aerial duels, registered three shots with two on target, completed two dribbles, made one key pass and won two fouls for his team.
Looking at his defensive stats, the Rangers number 17 made three tackles and one clearance over the course of ninety minutes.
Ifeanyi Emmanuel
Photo Credit : rangers.co.uk
Copyright ANS