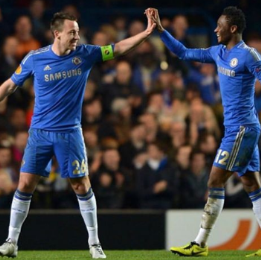 Budweiser, the official sponsor of English Premier League and Spanish La Liga, recently brought John Terry to Nigeria to feature in a game tagged 'Battle of the Greats' at Onikan Stadium in Lagos.
Terry and Real Madrid legend Roberto Carlos played alongside select players from the Nigeria Professional Football League.
A product of the Chelsea academy, Terry ended a 22-year association with Chelsea in 2017 after more than 700 games under his belt and is widely regarded as the club's most successful captain.
The central defender was teammates with three former Super Eagles stars during his time at Chelsea, namely 1996 Olympics gold medalist Celestine Babayaro who is the first African player to be signed by Chelsea, and 2013 African Cup of Nations winners John Obi Mikel and Victor Moses.
Mikel joined Chelsea aged nineteen and left in 2017 having won the Premier League twice, the FA Cup four times, the League Cup twice, and the Champions League and Europa League.
Moses ended his association with the Blues in July 2021 with 128 appearances and 18 goals to his name, as well as a Europa League, FA Cup and Premier League title.
Speaking at a press conference, Terry praised his former teammates, labeling the trio Nigeria legends.
The former England captain said : "I got to play with some big legends from Nigeria. The first one Celestine Babayaro, it was a long time ago so maybe some young people in the room don't remember.

"The most recent John Obi Mikel who probably at Chelsea was one of my best friends, he is a very proud man of where he comes from.

"He always made it clear to us English players how beautiful his country was and how much passion you guys showed.

"I like the fact that there are so many Chelsea supporters here in Lagos. It's incredible so to see that from my side thank you so much.

"Victor Moses fantastic player, had a great few years at Chelsea, now moved on but I think that's what inspires the next generation seeing that those dreams can come true, the likes of John Ob Mikel started where these guys have started, Celestine Babayaro a long time ago."
Ifeanyi Emmanuel
Copyright ANS