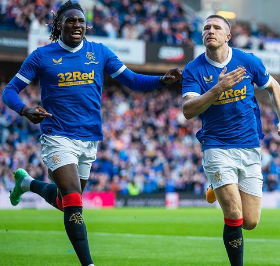 New Rangers manager Giovanni van Bronckhorst has waxed lyrical about Nigerian starlet Calvin Bassey, labeling the 2021 Super Eagles invitee a talented defender.
The 21-year-old has come in for the injured Leon Balogun in the last couple of games, filling in at center back.
Even Bassey, who is predominantly a left-back, would admit that center back is his least preferred position but has performed admirably in that role in Giovanni van Bronckhorst's first two games in charge.
Bassey helped goalkeeper Allan McGregor to post a clean sheet in a 2-0 win over Sparta Prague and the Light Blues conceded just once in their most recent game against Livingston.
Although Giovanni van Bronckhorst underlined that Bassey is still learning the trade as a center-half, the Dutch football tactician has been left impressed by what he's seen of the Nigerian after one week.
Speaking at Monday's pre-match press conference before the visit to Hibernian, van Bronckhorst told Rangers TV : "I'm very impressed because he is a talented defender, normally plays in the left-back position and didn't have much experience in the central area so I'm really happy with his performances.

"I think he has the physical ability to play there and we're helping him a lot in that position, when he has to pass, when he has to dribble, the position he has to take when the other defenders got the ball.

"He's a player who's very open in learning and he gives a lot of energy into the team. The last two games I'm really happy the way he played."
Bassey could continue his role at center back against Hibernian as Balogun remains unavailable for selection.
Igho Kingsley
Photo Credit : rangers.co.uk
Copyright ANS