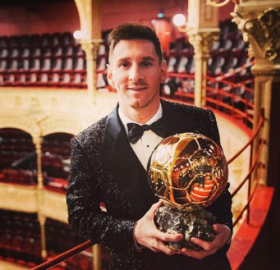 Paris Saint-Germain striker Lionel Messi has been crowned the best player in the world after winning the Ballon d'Or for the seventh time at a ceremony held at Théâtre du Châtelet in Paris on Monday night.
Completing the podium are Bayern Munich goal machine Robert Lewandowski and Chelsea midfielder Jorginho.
The Argentina genius received 613 points to place first ahead of the Poland international (580 points) and the 2020 European Championship winner (460 points).
Messi won the Copa America with Argentina, Copa del Rey trophy with Barcelona before his shock move to PSG and was the top scorer in the 2020-2021 La Liga with 30 goals in 35 games.
Nigeria was represented in the voting by Samm Audu who was nominated to represent Nigerian journalists by the Nigeria Football Federation.
Audu, publisher of Score Nigeria, has revealed that he picked Messi for a record-extending seventh Ballon d'Or.
The 34-year-old Messi previously won the Ballon d'Or in 2009, 2010, 2011, 2012, 2015 and 2019.
In total, six retired Nigeria internationals have been nominated for the Ballon d'Or in the past : Finidi George, Daniel Amokachi, Austin Okocha, Victor Ikpeba, Nwankwo Kanu and Sunday Oliseh.
Ifeanyi Emmanuel
Copyright ANS