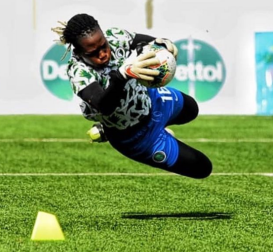 Stephanie Labbe who won the Olympic Games Tournament with Canada took place 3 in the ranking before the IFFHS winners of the last years, Sarah Bouhaddi (2016, 2017, 2018, 2020) and Sari Van Veenendaal (2019).
A product of Rivers Angels, Nnadozie switched to French club Paris FC in February 2020 after starring at the 2019 Women's World Cup, where she became the youngest goalkeeper to keep a clean sheet at the tournament.
The 20-year-old was a member of the Nigeria squad that won the 2018 Africa Women Cup of Nations and has appearances to her name at the U17 and U20 World Cups.
In the current season, Nnadozie has gone the distance in all the matches played by Paris FC in the Feminine Division 1 ,posting an impressive five clean sheets in nine appearances.
Igho Kingsley
Copyright ANS