...the complete Nigerian football portal
Subscribe
Ex-EPL ref has his say on penalty won by Onyeka in Brentford's 1-0 win vs Everton
Published: November 30, 2021 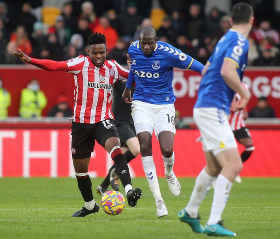 Former Premier League referee Dermot Gallagher has revealed that referee Darren England made the right call when giving a penalty to Brentford in their win over Everton at the weekend.
The Bees took a 1-0 lead into the break courtesy of Ivan Toney's goal from twelve yards following a penalty awarded.
The referee initially allowed play to continue after Andros Townsend's high boot caught Onyeka in the face but he was advised by VAR to take a look at the monitor to see whether it should result in a penalty.
England pointed to the penalty spot after reviewing the incident and Toney made no mistake from the spot.
Analyzing the weekend action in his weekly Ref Watch segment on Sky Sports, Gallagher stated : "Absolutely, it's the right decision. To VAR Jon Moss' credit, he sees what everyone else sees in the replays.
"It's a high boot and he connects with him, catches him in the face. It's a penalty. The referee Darren England was sent over to the screen, but I don't think anyone is going to argue with that.

"Even if the player stoops down, he's still at shoulder height and Townsend leads with his studs. Once he connects, it has to be a foul."
Onyeka, a summer signing from sister club FC Midtjylland, went the distance for the first time in a Premier League match against Everton, for whom Alex Iwobi was in action for ninety minutes.
Igho Kingsley
Photo Credit : brentfordfc.com
Copyright ANS