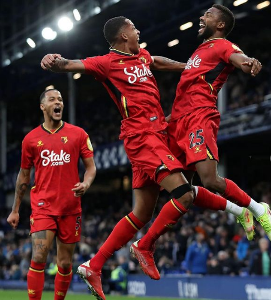 Today marks the start of a busy schedule for Watford and other Premier League clubs with as many seven matches to be played across twenty eight days.
The Hornets are keeping their fingers crossed on the availability of Emmanuel Dennis before the visit of table-toppers Chelsea to Vicarage Road.
The Nigeria international had to come off with a suspected ankle injury during the second half of a 4-2 loss to Leicester City at the weekend
Dennis initially tried to shake off the injury but eventually made way for Ashley Fletcher with nineteen minutes remaining.
Providing a squad update, Watford wrote on their official webpage : "Adam Masina is expected to be fit for tomorrow’s match with Chelsea despite picking up a knock against the Foxes, however Emmanuel Dennis is a doubt after his withdrawal at the King Power Stadium."
It would be a huge blow for manager Claudio Ranieri if his Nigerian striker is not passed fit to take to the field against the Blues.
Dennis is Watford's joint-top scorer in the Premier League, putting the ball in the back of the net on five occasions so far this season, an honour he shares with Josh King and Ismaïla Sarr.
Ifeanyi Emmanuel
Copyright ANS