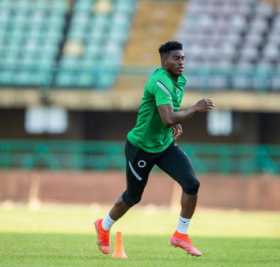 Super Eagles striker Taiwo Awoniyi has a chance to put himself in the shop window when Union Berlin trade tackles with RB Leipzig in a Bundesliga clash on Friday, December 3.
According to the Daily Mail, Manchester United will have their scouts present at Stadion An der Alten Försterei to watch the game between Union Berlin and RB Leipzig.
It is suggested that the main subject of interest is Mali young star Amadou Haidara, a defensive midfielder signed by new Manchester United interim manager Ralf Rangnick when he was at RB Leipzig.
It is common knowledge that the Red Devils are in the market for a defensive midfielder ahead of the January transfer window and the likes of Wilfred Ndidi, Kalvin Phillips and Declan Rice have been mentioned as possible targets.
Awoniyi has no disciplinary problem ahead of the visit of RB Leipzig with no yellow card received in this season's Bundesliga, meaning it is all but confirmed that he will make his fourteenth consecutive appearance in the division in front of Manchester United scouts.
The 24-year-old still harbours the ambition to play in the Premier League having failed to do so during his six-year association with Liverpool before his permanent switch to Union Berlin.
Only Bayern Munich's Robert Lewandowski (14) and Borussia Dortmund's Erling Haaland (10) have scored more goals than Awoniyi (8) in the German top-flight in 2021-2022.
Ifeanyi Emmanuel
Copyright ANS