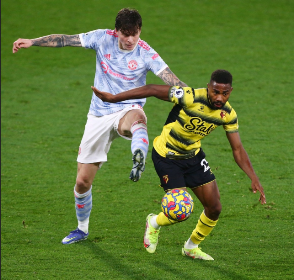 Emmanuel Dennis joined a select group of players to directly participate in ten goals within twelve Premier League games when he found the net for Watford in their 4-2 loss to Leicester City at the weekend.
The Nigeria international followed in the footsteps of Eric Cantona (11 games), Arjen Robben (11 games), Andrey Arshavin (10 games), Jurgen Klinsmann (12 games) and Bruno Fernandes (9 games) as the only players to reach this feat after their first 12 matches or fewer.
Watford boss Claudio Ranieri believes Dennis has high potential and still sees room for improvement for his number 25 given his age.
The former Club Brugge star has been rated as doubtful for the visit of Chelsea to Vicarage Road on Wednesday.
Asked for his opinion on the potential of Dennis, Ranieri said at today's pre-match press conference : "I think he's a young player and then I think he can improve a lot, a lot because sometimes he's too generous, he wants to do everything one hundred percent.

"Sometimes you have to slow down and think what is the best solution but I'm working with him and I'm very, very satisfied, and I'm sure he can improve".
Dennis has started four of the last six games played by Watford since Ranieri took over the reins at the Vic.
Ifeanyi Emmanuel
Photo Credit : watfordfc.com
Copyright ANS