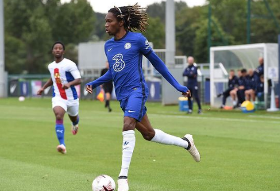 Chelsea are through to the last sixteen of the Papa John's Trophy following their win on penalties against League Two opponents Forest Green Rovers at Fully Charged New Lawn in Gloucestershire on Tuesday night.
The Blues had two players of Nigerian descent in their starting lineup - striker Bryan Fiabema and versatile winger Tariq Uwakwe.
After a goalless first half, Josh March beat the tall Chelsea goalkeeper with a fine little chip to open the scoring for Forest Green Rovers in the 64th minute and their fans were still celebrating when Uwakwe netted the equaliser.
The Anglo-Nigerian ran into the box and slotted home a right-footed shot into the corner.
It was his first goal for the Blues youth teams in 689 days, his last goal prior to the visit to Forest Green Rovers came in a Premier League 2 clash against Manchester City on January 11, 2020.
Uwakwe, a former England U18 international, spent the whole of last season on loan at Accrington Stanley.
Chelsea edged the penalty shootout against Forest Green Rovers 4-1 with none of the aforementioned players of Nigerian descent taking a kick for the Blues following their substitution in the second half.
Ifeanyi Emmanuel
Photo Credit : chelseafc.com
Copyright ANS