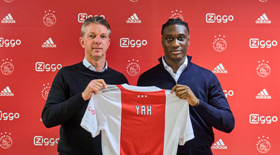 Through their official website,  Eredivisie powerhouse Ajax Amsterdam have announced that Dutch-Nigerian midfielder Gibson Yah has signed a new deal with the club.
Yah has been rewarded with his first professional contract after an impressive rise through the academy ranks.
The 18-year-old honed his footballing skills at DVC Buiksloot before transferring to Ajax Amsterdam in 2014.

Yah's first pro deal will initially keep him at Ajax until June 30, 2022 and an option for an extra season has been included in the contract.
The Jong Ajax starlet has been struggling with an injury since August, limiting his appearances in the Keuken Kampioen Divisie to only four matches this term.
The Dutch-Nigerian is comfortable playing as a central midfielder, defensive midfielder and central defender.
"Yes, you have to think realistically. I am now injured and hope that I can be back on the field as soon as possible.," Yah said to Ajax's official website.
"Then I can show that I belong to Ajax. If all goes well, I will train with the group again in three weeks I want to get fit again first.

"I give everything, every day. I'm texting a lot with my physiotherapists to ask what I should do or what could be done better."
Yah was teammates with four Dutch-Nigerian youngsters Dillon Hoogewerf, Malcolm Ebiowei, Noah Ohio and Emanuel Emegha in the Netherlands U15 national team during the 2017-2018 season.
Ifeanyi Emmanuel
Photo Credit : ajax.nl
Copyright ANS