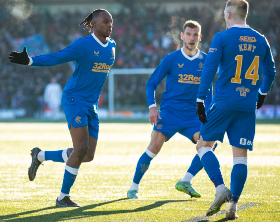 Three English Premier League clubs are interested in signing left-footed Glasgow Rangers midfielder Joe Aribo ahead of the opening of the transfer window.
Previously, Crystal Palace were credited with an interest in the Nigeria international and now the Daily Mail is reporting that Brentford and Watford have joined the race for his signature.
Aribo will enter the final eighteen months of his contract with the Scottish champions in January and the Light Blues' hierarchy could sanction the sale of the player if he does not put pen to paper on a new contract.
The 25-year-old has been lighting up the Scottish Premiership since his move from Charlton Athletic in the summer of 2019 with thirteen goals and fourteen assists in 5,262 minutes spread across 66 matches in the regular season.
He came up through the Staines Town youth system, then moved to Charlton Athletic academy where he rose through the ranks before making his first team debut in October 2016.
Watford could be in the market for a central midfielder following the long-term injury suffered by Oghenekaro Etebo and there's a possibility that the Stoke City loanee could be returning to his parent club at the end of the season.
Aribo is set to represent Nigeria's national team at the upcoming Africa Cup of Nations barring an injury.
Ifeanyi Emmanuel
Photo Credit : rangers.co.uk
Copyright ANS