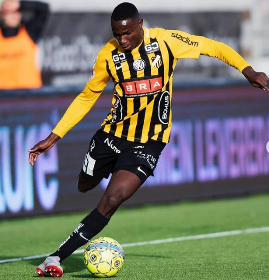 Swedish Allsvenskan side BK Hacken have offered a new deal to former Nigeria U23 international Godswill Ekpolo.
The Barcelona-reared defender has less than a month remaining on his contract and BK Hacken are determined to tie him down to a new deal.
Ekpolo has carved out a reputation as one of the best right-backs in the Swedish top-flight since transferring to BK Hacken, scoring six goals and assisting ten others in 112 league matches, so tying him up to a new contract would be great business for the Gothenburg-based club.
"We have offered him a new contract, but there is no concrete yes or no. I think there are good chances that he will stay, that's the feeling," BK Hacken's sports director Martin Ericsson told GP via Fotbolltransfers.
Ekpolo's case is not the same as Franklin Tebo who joined BK Hacken on a temporary basis in August 2021 and the loan deal came with an option to buy.
"We are negotiating an agreement. The opportunities to keep him (Tebo) are good with the purchase option. There we believe we will arrive. He really stands out in some qualities," says Ericsson.
Tebo has appeared in five Allsvenskan matches but has yet to make his starting debut for BK Hacken.
Igho Kingsley
Photo Credit : bkhacken.se
Copyright ANS