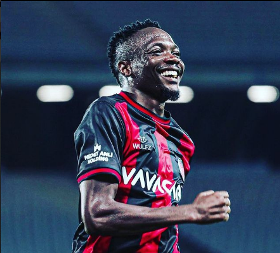 Super Eagles captain Ahmed Musa ended his goal drought in style as Fatih Karagumruk defeated Sariyer 2-0 in the fourth round of the Turkish Cup on Wednesday afternoon.
Since netting on his competitive debut for Fatih Karagumruk, the former CSKA Moscow striker fired blanks in his next twelve matches in the Super Lig but it was worth the wait.
After Zukanovic's header broke the deadlock midway through the first half, Musa scored the clincher in the 66th minute in his first appearance in the Turkish Cup.
Nigeria's all-time appearance holder doubled Fatih Karagumruk's advantage with a thunderous strike that went in off the crossbar.
Initially play continued for a brief period but the referee deemed that the ball had crossed the line and awarded the goal to Fatih Karagumruk.
Musa was in action for 777 minutes in total before ending his goal drought.
The two-time World Cupper joined Fatih Karagumruk in July on a two-year contract but there is the option to extend the deal for a further season.
Ifeanyi Emmanuel
Copyright ANS