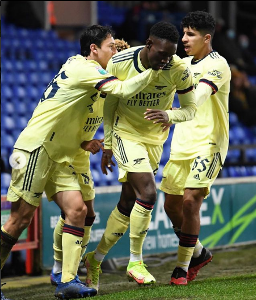 Arsenal have progressed to the next round of the Papa John's Trophy after beating the first team of League One side Ipswich Town on penalties at Portman Road on Wednesday night.
Four players of Nigerian descent goalkeeper Ovie Ejeheri, Mazeed Ogungbo, Folarin Balogun and Tim Akinola put in a full shift for the young Gunners; Ryan Alebiosu entered the game as a substitute in the 89th minute, while James Olayinka and Joel Ideho were non-playing substitutes.
Ipswich Town led 2-0 at the break courtesy of a first half brace from Kayden Jackso, only for Arsenal to mount a comeback in the second stanza.
In the 68th minute, the visitors pulled a goal back as Kane Vincent-Young headed the ball into his own net following a a corner kick.
Balogun, wearing the captain's armband, brought the game back to parity with a left-footed finish from a tight angle in the 71st minute.
The Blues thought they had won it with two minutes remaining but the goal was disallowed for offside.
Following a 2-2 draw in regulation time, Arsenal won the shootout 4-3 with Balogun successfully converting his kick.
Ifeanyi Emmanuel
Photo Credit : arsenal.com
Copyright ANS