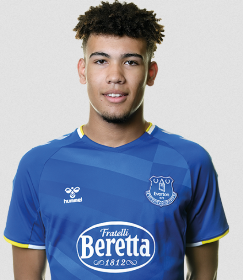 Everton made light work of Manchester United to secure a comfortable 3-0 victory in an U18 Premier League clash at Finch Farm Training Ground on Saturday afternoon.
The Toffees were without a win in four matches in all competitions before the visit of the Red Devils, sharing the spoils with Newcastle United, Blackburn Rovers and Arsenal and losing to Liverpool.
Francis Okoronkwo, an Anglo-Nigerian striker signed from Sunderland in September, was undoubtedly the star of the show with a goal and assist after coming off the bench to help Everton end a four-match winless streak.
The deadlock was not broken until two minutes into first half stoppage time when Emilio Lawrence gave the home team the lead.
On as a substitute in the 62nd minute, Okoronkwo headed home to double Everton's advantage seven minutes later and Martin Sherif sealed the points with a third goal in the 73rd minute.
Okoronkwo has netted his first goal in Everton colours after spending only 27 minutes on the pitch having logged 22 minutes on his competitive debut for the U18s against Arsenal a week ago.
He has been described as a skilful attacker who possesses impressive speed, movement and balance, and is comfortable operating in all positions across the frontline.
Igho Kingsley
Photo Credit : evertonfc.com
Copyright ANS