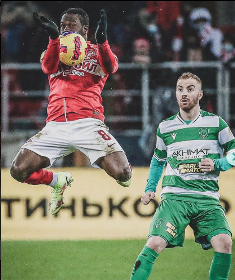 Former Chelsea star Victor Moses was delighted to mark his return from injury with a goal for Spartak Moscow in their 2-1 victory over Akhmat Grozny in a Russian Premier League match at Otkrytie Bank Arena on Saturday evening.
The 2013 Africa Cup of Nations winner missed Spartak Moscow's last game in the top-flight due to a muscular injury he suffered in the closing minutes against Napoli in the Europa League on November 24.
Twelve minutes into the game vs Akhmat Grozny, Moses opened the scoring when he applied the finishing touch to a brilliant team move with a left-footed strike into the bottom corner.
Daniil Utkin brought the game back to parity in first half stoppage time and Quincy Promes bagged the game-winning goal with three minutes to go.
"Big 3 points! Great win and buzzing to get on the scoresheet again!" Moses wrote on Instagram after the game.
Moses's goal against Akhmat Grozny was his first of the season in the Russian Premier League.
The 30-year-old has been one of Spartak's standout players in the Europa League, directly participating in five of the nine goals they have scored in the competition.
Ifeanyi Emmanuel
Copyright ANS