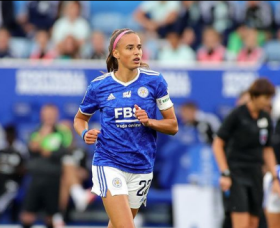 Leicester City pulled off a shock win on penalties over Manchester United at Leigh Sports Village in the FA Women’s Continental League Cup on Sunday.
The Foxes, the basement team in the Women's Super League, had in their starting lineup Super Falcons hopeful Ashleigh Plumptre and the central defender gave a good account of herself over the duration of the game in which she went the distance.
Former England youth international Plumptre returned in time for the big clash after attending a Nigeria training camp in Abuja.
Sophie Howard headed home a dangerous delivery to give Leicester City the lead on 32 minutes and Russo restored parity two minutes into the second half.
Leicester City could have retaken the lead after the hour mark but Plumptre saw her header miss the target.
Eleven minutes from time, Natasha Flint made it 2-1 but United hit back immediately through Zelem so the fixture had to be decided on penalties.
Leicester City won the shootout 4-3 after Demi Lambourne saved two spot kicks from Zelem and Boe Risa.
Ifeanyi Emmanuel
Photo Credit : lcfc.com