...the complete Nigerian football portal
Subscribe
Nigerian GK details how he joined Colchester after being on the radar of Norwich, AFC Wimbledon
Published: December 07, 2021 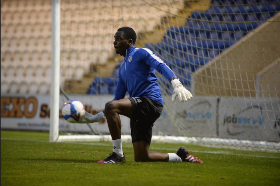 Nigeria-eligible goalkeeper Endurance Johnson has detailed how his move to Colchester United came about.

The Anglo-Nigerian teenager has worked his way through the ranks at Colchester United and is now a key player for the development squad.

Johnson could have ended up at either Norwich City or AFC Wimbledon prior to his move to The U's but the deals fell through.

He started football at the age of five and was playing for fun in his area in South West London until he got into secondary school before he started taking football seriously.

Speaking to allnigeriasoccer.com, Johnson said : "When I got into secondary school however I was able to find a team. I was there for some years and I am very thankful for what they did for me as they helped me improve drastically during my time there.

"When I was 15, I then joined Brentford Development which is where I started to get noticed. I was being watched by Norwich but that didn't really go anywhere.

"I then did trials for AFC Wimbledon, thought I was doing well but I wasn't really getting any game time and at the time Colchester wanted me in on trial.

"I played an academy game for Colchester against Queens Park Rangers and I really enjoyed it. The players made me feel welcome and I felt I would be a more valuable player here so I decided to stay and do a 6-week trial and I signed a schoolboy contract.

"Afterwards I continued performing well and they gave me a two-year scholarship which I am now in my last year of."

Johnson, who has cited  legendary Manchester United glovesman Edwin van der Sar and Leicester City icon Kasper Schmeichel as his role models, has highlighted his strengths as a goalkeeper and one area of his game that needs to be better.

"My strengths as a goalkeeper is dealing with through balls into the box and shot stopping.

"Growing up I was very good at keeping the ball out of the net but I lacked the technical side of it which has improved a lot over the past two years.

"My weakness and a part of my game I am trying to improve is my distribution. Something I added to my game not so long ago, however, it is improving every day and every week," Johnson added.


Johnson is in contention to start for Colchecter United when Arsenal visit the JobServe Community Stadium in the third round of the FA Youth Cup on Friday, December 10.
Ifeanyi Emmanuel
Copyright ANS