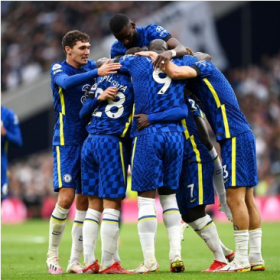 Former African Footballer of the Year and 1996 Olympics gold medalist, Victor Ikpeba has defended manager Thomas Tuchel over his decision not to start Romelu Lukaku in the last few matches.
The Belgium striker became the most expensive player in Chelsea's history when he ended his association with Inter Milan in August 2021 in exchange for 115 million euros but has not really hit the heights expected of him since his big money move.
Lukaku is now available for selection having recovered from an ankle injury he suffered in a Champions League tie against Malmo in October but has not been picked in the starting lineup in the last three Premier League games.
Ikpeba underlined that Chelsea do not have goalscoring problems but have to sort out their defence.
Asked why Tuchel is not possibly starting Lukaku, Ikpeba said on SuperSport's Monday Night Football : "No, you cannot start. Lukaku has had his own shares of injury worries, not even now, at Inter Milan now with Chelsea.
"You don't bring in a player who has been out for a month or two , you don't rush him because he can get injured again so he needs some time to get back to match fitness.

"The weakest link in this Chelsea side is still the defence, though they have been brilliant but it showed in the last few games that they can concede goals.

"West Ham exposed the fragility of the Chelsea defence and I think other teams will believe they can score against this team."
An Africa Cup of Nations winner in 1994, Ikpeba was named Africa's best footballer for 1997 and won the Ebony Shoe award in his last season at RFC Liege.
Ifeanyi Emmanuel
Photo Credit : chelseafc.com
Copyright ANS