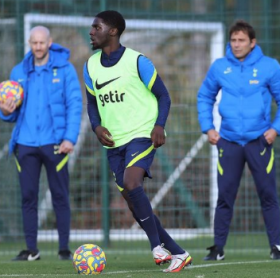 Allnigeriasoccer.com can exclusively report that Tottenham Hotspur intend to retain versatile London-born Nigerian defender Tobi Omole for the 2022-2023 season.
Omole will enter the final six months of his contract with the north London club in January and the Premier League side are keen to tie him down to a new deal.
It is confirmed that the Anglo-Nigerian youngster has been offered a new contract and negotiations over a contract renewal are at an advanced stage.
Aged 21, Omole joined Tottenham Hotspur in October 2020 following a successful trial after he was surprisingly released by Arsenal.
He is now pushing for a first team breakthrough at Spurs and is highly thought of by the coaching staff given that he was registered on the Premier League and Europa Conference League rosters as a senior player.
Ex-Tottenham manager Nuno Espírito Santo was the first to hand Omole a call-up to the first team, naming him as a reserve option against Rennes, NS Mura and Crystal Palace but he was a non-playing substitute in the three games.
New boss Antonio Conte has been observing the Anglo-Nigerian at close quarters ahead of a possible debut before the end of the season.
Capable of playing as a full-back, left-sided central defender and defensive midfielder, Omole has scored two goals in his last ten matches in the Premier League 2.
Ifeanyi Emmanuel
Copyright ANS